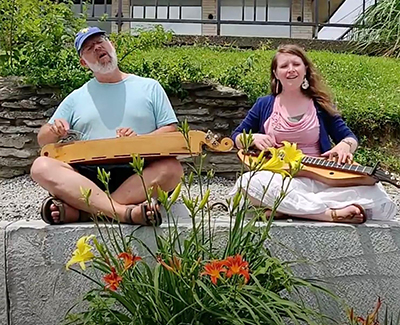 Play EVERYwhere! I saw this photo of my partner Steve Eulberg, recently sitting on the sidewalk playing on his dulcimer and singing with Erin Mae Lewis. I have also seen a photo of Steve playing on the beach. It seems he enjoys playing everywhere, for sure. And so should we! 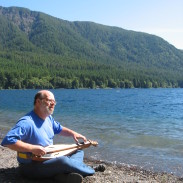 Photos like these reminded me of the text from Green Eggs & Ham by Dr. Seuss. If we changed the words just a bit, we might say … 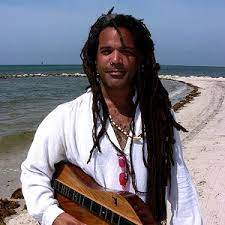 Start thinking outside the box. Go outside on your front porch to practice. Take your dulcimer along to the beach, and always pack it when you’re going on a camping trip. Make music on a bench in the park. Don’t worry about any folks who might be hanging around because practicing in public is a great way to increase your confidence, as people will surely gather near you to listen.

Janis Price, 57, has played music nearly her whole life, starting with piano when she was five years old. But in the fall of 2009, the guitar was still something of mystery to her. She had been playing for only a couple of months and was struggling a bit with the new challenges. Yet, instead of holing up in her living room to practice until she felt more confident, she did something totally unexpected. She packed up her guitar and sheet music, headed into downtown Los Angeles, and set up outdoors to work through the new techniques.

“I looked at it as a way to make the time to practice, because I’m always so busy,” explains Price, a legal secretary. She’s found that bringing her music outdoors helps her focus. “Playing out in public encourages me to approach things a little bit differently. Even though it’s not a performance, knowing that I might have observers helps me to organize my practice session,” she says. 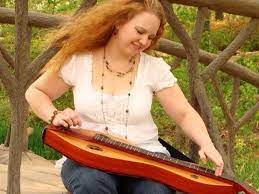 Just be sure, if you practice outside, you stay under some shade, as sun is hard on any instrument.