Dulci-Bro: Where can I get one?

by Steve Eulberg We have begun a Lesson series on learning to play the Dulci-Bro and the natural question arises:  where can I get one? Homer Ledford is credited by at least one observer as being the originator of a resonator dulcimer. 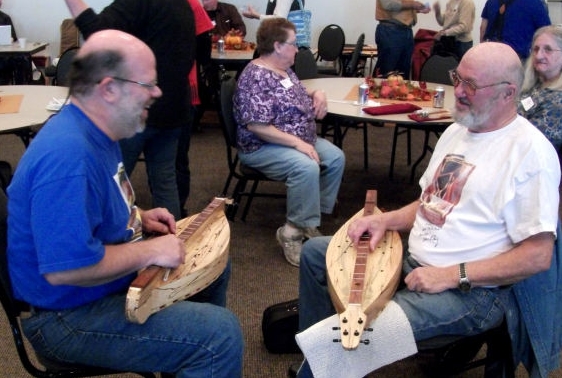 I ordered mine (many years ago) from Don Neuhauser, who quite simply, is an amazing dulcimer builder! Don is in Charlestown, Indiana. My dulci-bro is built with a full Quarterman, spun-aluminum cone, in a body of cherry is that is aging in the rich tones that Don predicted it would.  It comes with a raised nut and heavier gauge strings so that it can be played with a slide, National Guitar or Dobro-style.  [Contact him dot3518 (at) gmail.com ] Mike Clemmer, of Wood-N-Strings Dulcimers also builds what he calls the "Clemm-Bro" and this link shows him playing it for a local television interview.  I have played Mike's and enjoy it's tone and playability.  Mike is in Townsend, Tennessee. Ben Seymour, of Kudzu Patch Dulcimers is building the "Dulci-nator."  I have not played his instruments, but have one of his Galax dulcimers and absolutely love its playability, appearance and tone.  Ben is in Tryon, North Carolina. [The other builders can be contacted via their websites.] At DulcimerCrossing.com, we have a series of lessons dedicated to playing this fine instrument in the slide style.

As I was searching for this kind of instrument, the depth and breadth of tone was my main concern. Don Neuhauser uses a full Quarterman cone (just like Dobro or National guitars) which includes an intricate web that spreads the resonance of the tone from the bridge throughout the entire cone. That tone is what I find sooooo--satisfying.
Read more
Read less
Like Reply
Please log in or register to post a comment
Pam Temple
May 27, 2014 06:16am

I agree that Dulci-bro has an amazing dobro guitar sound. I'm glad you are teaching a class on it. I took your blues class a few years ago and loved it. I would love to take your Dulci-bro class someday but first I need to buy one.
Read more
Read less
Like Reply
Please log in or register to post a comment
Paula G Brawdy
Mar 25, 2019 03:16pm

Hi Paula, do you still have your Dulci-bros? If so, what are you asking for them? Thank you.
Read more
Read less
Like Reply
Please log in or register to post a comment
Paula G Brawdy
Jun 28, 2019 04:14am

Pam...Paula Brawdy (in the comments section here) is selling (2) Neuhauser Dulci-bros and I will be teaching a week-long class at Kentucky Music Week in Bardstown, KY June 23-28. This might be the perfect time for you!
Read more
Read less
Like Reply
Please log in or register to post a comment