I follow the adventures of a real-life, full-time, traveling busker, Lyle Rickards, on FB. Now “busker” is a term coined to refer to a street musician or performer, and Lyle fits this profile perfectly. He plays several different instruments, but I most often see him playing a harmonica and mountain dulcimer … both at the same time. Lyle is often broke and dealing with yet another difficulty, but he is dedicated to his lifestyle of busking and couldn’t imagine any other way of making a living. Recently, a crew of filmmakers followed him around for a couple of days, and taped this story about him. 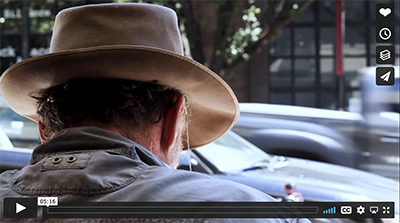 A couple of weeks ago, Lyle was selected to be in a scene for “Hero,” a feature film about a misfit artist who is trying to find a place in the world while stepping up for his pregnant ex-girlfriend. It’s no surprise that they cast him to play the part of a street busker! Here is a link to his FB page. https://www.facebook.com/lyle.rickards  I’m hoping one day to see the link there to a clip that showcases his part in the film.

Being a busker can be a hard life, as proven by the anonymous experiment of Joshua Bell. Joshua began taking violin lessons at the age of four after his mother discovered that he had stretched rubber bands across the handles of his dresser drawer to pluck out music he had heard her play on the piano. By the age of 14, Bell appeared as a soloist with the Philadelphia Orchestra, at 17 Bell made his Carnegie Hall debut with the St. Louis Symphony Orchestra, and as an exclusive recording artist for Sony Classical, Joshua Bell has recorded more than 40 CDs. Joshua's instrument is a 300-year old Stradivarius violin, which was made in 1713 and is valued at over $3,000,000. He has performed all over the world, and people have paid $350 and more for a ticket to one of his concerts. 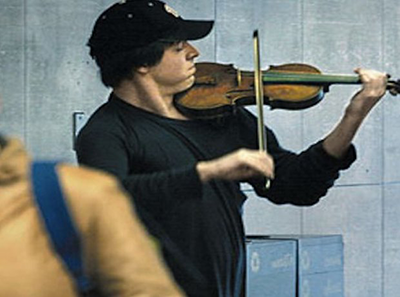 In an experiment conducted by 'The Washington Post', Joshua performed as an incognito busker at a metro station in Washington D.C. on 12 January 2007. Of the more than 1000 people who passed by, only seven stopped to listen, and only one person recognized him. He collected just $32.17 from 27 people (excluding $20 from the woman who recognized him).

I have busked myself, not on the street as Steve has in Fort Collins, CO, but in 3 different craft malls where tourists came to buy souvenirs. I didn’t find it a great way to make a living, but it was the best way ever to get in a LOT of practice time. My favorite spot was just down from the ice cream store. I would hang a big sign from my hammered dulcimer stand with an ice cream cone on it, and an arrow pointing down to my basket. The sign said, “I Play for Ice Cream!” Little old ladies would tug on their husbands' arm and say, “Honey, she needs an ice cream cone. Give her some money.” In some cases, they just went ahead and bought the ice cream cone, and encouraged me to take a break, sit down with them, and talk about my instrument. (Yes, I gained a bit of weight that year!) 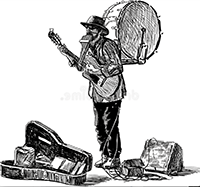 If you would like to busk for practice or money, here are a few common-sense tips you should follow.

When it goes well, there aren’t too many better ways to spend a day in the great outdoors. Glorious sunshine, coins in your instrument case, folks singing along … it can be a lot of fun. Have any of you tried busking yet?

The tragedy that no one noticed Josh and his $3m Strad is euro-centric, elitist and ultimately a little racist.

Busking is a skill, like any skill. A subway is a venue,  just like any venue. And Josh didn't play the room.

He played during the morning commute. People are going to work, they can't stop. He'd have made more money if he played the evening rush.  He chose to play a difficult 14 minute long Bach piece instead of fairly well-known pieces. This whole notion of the experiment was that he was such a gifted player, playing the greatest music mankind has ever created on the best instrument ever invented but that it was lost on the hoi polloi, is flat-out elitist and blames the audience for not getting it. If I showed up at an old folks home with a Flying V and a Marshall stack and busted out "crazy train" would it be their fault they didn't "get it?"

When I was gifted my first ever dulcimer in 2002, my first thought was "now I can busk" (because playing something weird is rule #1).  I've been a busker ever since. I'm good at my job, but no one expects me to be able to play Paganini. Josh kills the Paganini but why should it be expected that he be good at Lyle's job?

One of the first articles I wrote for DPN was about Australian dulcimer players. Two of them made their living busking in Europe. Let me repeat that: They paid their bills for the year street performing in Europe after flying them and all their gear from Australia. Seems to me if it's such a hard life, they'd have gotten a job as a postman or something. Lyle (a great player BTW) is a full-time busker in Asheville, NC. That's a tourist town, and while it ain't Frisco-expensive, it ain't cheap. These are not lightly made career choices made by desperate people.

Is busking hard work? Yes. Name me one thing worth doing that isn't?

But the worst part of all this is that it propels this stupid myth that Classical music is somehow a form of music better than "regular" music. That it's reserved for the select few who have the talent and the training to play it and out of the reach of common people like dulcimer folk. It's condescending logic that--by extension--says, "while it's cool you've learned to play the dulcimer in your 60's or 70's. Real music is--and will remain--out of reach for you." Is that what you want your students to believe? I don't.

P.S. The rest of the article was fantastic, filled with good tips and advice. Just shut up about Josh Bell already. :-)

P.P.S. I tend to pace when I write, so thanks for helping me get my steps in today. :-D