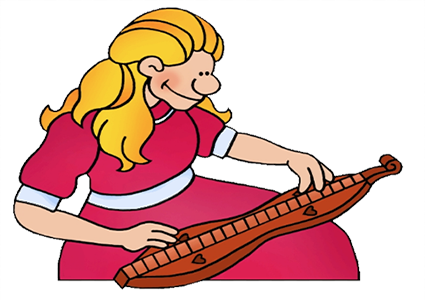 Have you ever gone to a jam session and gotten left behind holding your pick in confusion? If you’re just starting out to learn to play the dulcimer, it can be frustrating when everything that sounds so good seems so complex. You just want to play along with the others, but everyone else is WAY ahead of you. Well, there’s a solution for that. Just play chords until the melodies start to sink in and sound familiar.

You may have noticed that many of the songs we play at jam sessions sound similar. The reason is, many of the tunes we play are simply 3-chord songs. You see, there are three chords which work really well together, called the “one” “four” and “five” chords, usually written using the Roman numerals “I” “IV” and “V”. These chords are called the 1, 4, and 5 chords because they are built on the first, fourth, and fifth tones of the scale.  If you learn to play just these 3 chords, you will be able to play along with a huge number of songs at jam session.

Hammered dulcimer players go with the flow in D as well, but it is easy to learn these 3 basic chords in any key.  Just position your hammers around any markers, and follow these patterns.  After you learn the basic positions, stretch yourself to learn several inversions and positions for the same chords. 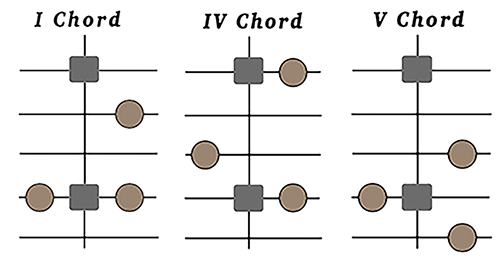 Now you might want to start with 2-chord songs and there are plenty of those you could practice.  Just Google "2 chord easy songs for beginners."  Mountain dulcimer players will use only the D and G chords (I and V chords). That's where my son and I land when we practice together. And just one notch trickier than 3-chord songs are the 4-chord songs. The chords may vary, but you will often hear the I, IV, V, and VI chords (one, four, five, and six chords) in a tune. Other times you might hear the II chord instead of the VI chord.

If you're strictly a melody player, I challenge you to change it up.  Switch over to playing chords and I promise you will enjoy that just as much, if not more.